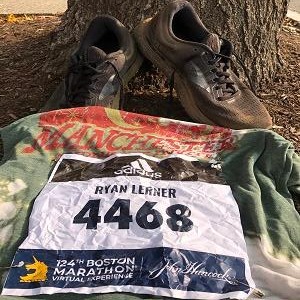 This past weekend, I participated in the virtual running of the 2020 Boston Marathon. The in-person run from Hopkinton to Boylston Street, which would have happened last April, was canceled due to COVID-19.

My route of choice was a dirt rail trail in Manchester, CT, where my family lives. I ran out to Andover 13.25 miles away and back. Per the virtual race rules, I had a six-hour window within which to complete the run. Personally, I had to be done by 9AM because I was scheduled to help with first confessions for second graders at my home parish. They were preparing for their First Holy Communion.

I started at 4:30AM. It was a clear, crisp morning. My way was lit by a headlamp, along with the help of the stars and the crescent moon. For the first 5 miles I was alone, except for the critters, whose glowing eyes peered out curiously at me as I ran by. As I settled into my stride, I enjoyed the solitude; the sound of my breath and my footfall; the chatter of nighttime insects.

Then I was joined on the trail, one by one, by my running group.

Dan, my high school team captain, now a high school Athletic Director and one of my most constant running companions, caught up to me at about 5.5 miles, riding a bike and carrying a backpack with water, watered-down Gatorade and a few packets of GU Energy Gel to help sustain my efforts. At about 9 miles in, Aaron, a high school Math teacher and Cross Country/Track coach, entered the trail and rode alongside Dan. That was a nice surprise. And then at 10, Will—the youngest (and most in shape) among us—joined in to run alongside me for the remaining 16 miles.

By the end of the first 13.25, the birds greeted the dawn as mist rolled over the hills and the sun began to rise, lighting up the waking world. With about 6 miles to go, Ryan jumped out of his car and shouted words of encouragement.

As I have shared before, I pray when I run. And in the marathon, I have gotten into the practice of dedicating each mile to someone, a group of people, an intention—and, always reserve the last 10 miles for those who are really struggling, those who are sick or suffering in any way, those who are fighting for their lives and these days, those who are fighting for their rights and dignity. The healing of the wounds of our country and our world was also on my mind. This morning, filled with gratitude for God’s many gifts, the beauty of the earth and good friends, I also prayed that hope would rise in our midst like the sun each morning.

As most marathoners will tell you, after a few hours of running there’s very little fuel left when you enter the final stretch. That rang true on Saturday morning. For those last strides over those last miles through the 26.5, I really was just “running on faith.”

The NYC Marathon Is Back! And It Will Feature a Field of 33,000 Runners

Nearly 30% of Runners Started During the Pandemic, According to New Survey